Anonymous III (Gopal Kambo, Michael Bell, and Stephen Matthews) is a newly-formed early music ensemble, established in 2017 and based in Cambridge, UK. The group seeks to establish themselves as specialised performers of chant and medieval polyphony, with a particular interest in music associated with 12th- and 13th-century Paris.

Anonymous III have already built a profile of workshops and concerts across the UK and Europe. The small size and flexibility of the ensemble makes the group a perfect ‘sounding board’ for the SoundMe project, enabling us to test out new interpretative ideas for this music and to help answer research questions posed by scholars through performance. 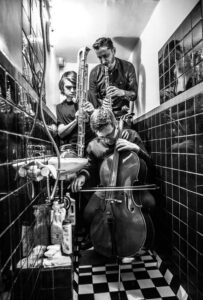 Bastarda, based in Warsaw, is a group of young musicians (Paweł Szamburski – clarinet, Tomasz Pokrzywiński – cello, and Michał Górczyński – contrabass clarinet) with close ties to the Lado ABC independent music scene, and the Lado Cultural Association. Coming from different backgrounds ‒ free improvised, classical and modern jazz ‒, the group plays new and original interpretations of medieval music. In October 2017 Bastarda released its debut album with music based on compositions by Petrus Wilhelmi de Grudencz (b. 1392).

As an Associate Partner of the project, Bastarda is interested in demonstrating how early music can sound today, filtered through personal and contemporary musical experiences. The group share their knowledge with scholars, taking part in project meetings and debates, as well as playing live improvised music inspired by the ongoing research of the SoundMe teams. Thanks to their collaboration with Bastarda, musicologists are able to experience what makes late-medieval and early-modern music attractive for young jazz musicians and their audiences today. 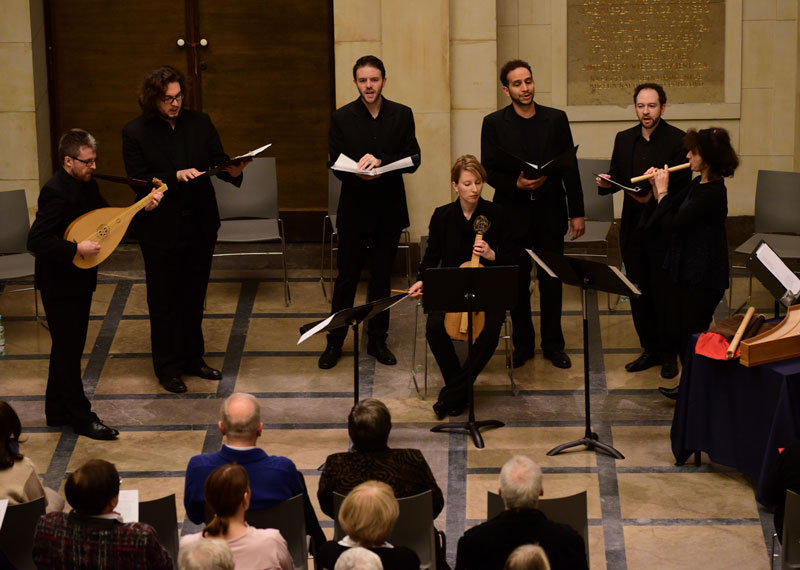 Formed in 2000, La Morra is among the leading ensembles specializing in the performance of late Medieval and early Renaissance music. The ensemble makes its home in Basle, the cultural capital of Switzerland. Under the artistic leadership of Corina Marti and Michal Gondko, La Morra re-defines itself according to the requirements of the projects it undertakes.

As an Associate Partner of SoundMe, La Morra is particularly interested in exploring the aspects of the survival and functioning of older repertoires in the early Modern times.

Project The Presence of the Past

During the academic year 2017-18, composition students supervised by Michal Rataj at the Academy of Performing Arts in Prague were invited by SoundMe to create new compositions based on the theme Uses of the Past, including but not limited to the materials studied by the SoundMe teams. For the five pieces created with SoundMe support, see → here.

Michal Rataj (born 1975) is a composer, performer and sound designer based in Prague, Czech Republic. He composes mainly electroacoustic and chamber or orchestral instrumental music and receives performances throughout Europe and broadcasts worldwide. Recently he has been active as real-time performer of his acousmatic music. He gives sound performances alone or with different music partners. 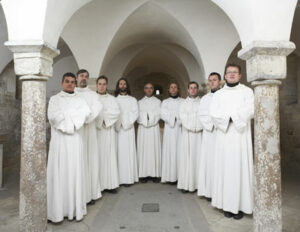 Schola Gregoriana Pragensis was established by David Eben in 1987. During the first two years of the group’s existence, the ensemble performed only within a liturgical context, but from 1989, and ever since, the group had a very active recording and performing profile, touring widely in Europe, Israel, and Japan. The Schola co-operated in various projects with outstanding Czech and international foreign artists, and their repertoire also extends to contemporary music, including compositions by young Czech composers that were written for and premiered by the Schola.

Schola Gregoriana Pragensis have been focusing on the interpretation of chant according to the earliest neumatic sources of the 10th to 11th century, and the presentation of the Bohemian plainchant tradition, as well as early polyphony from that region. Thanks to the ensemble’s intensive study of medieval sources, its programmes include a number of newly discovered compositions dating from the 13th to 15th centuries. The ensemble is excited to work together with musicologists from several European countries within the SoundMe project and to share its experience in research-based performance of chant and other repertories (both monophonic and polyphonic) reaching up to the 16th century. 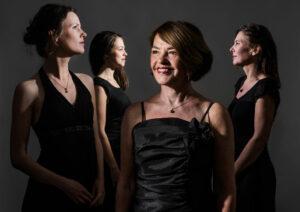 Trigon Ensemble, directed by Margot Kalse, is a vocal ensemble of three to four female singers, specialized in researching and performing directly from manuscripts of the Middle Ages. Due to our long and extensive experience in bringing to life and performing vocal music of the middle ages, we consider ourselves perfectly suited and exceptionally qualified to be an Associate Partner of the Sound Memories project.

We are passionate about bringing to life late medieval music from manuscripts that have not yet been researched for their musical and performance potential. Our vocal practice-based approach, in collaboration with research methods of the musicologists, will inform and strengthen the field, in such a way that questions arising from performance can immediately be addressed by the researchers, and vice versa. The ensemble can attempt any experiment the researchers propose. In addition, the repertoire and the results of the project will reach a much wider audience through our public performances.