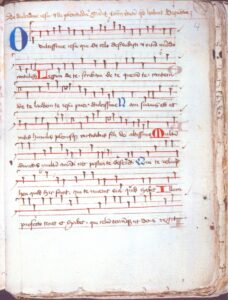 Utrecht, Universiteitsbibliotheek ms. 16 H 34, fol. 4r (15th century, IJssel valley, Netherlands). This collection of small booklets is one of the most important song manuscripts from the Devotio moderna. On fol. 4r, the sequence O dulcissime Jesu opens the first booklet.

The SoundMe project ran from 1 July 2016 until 30 September 2019. It explored the mechanisms by which Europeans of a distant past (c. 1200-1600) used collective musical memory to shape cultural and political behaviour. In which ways are these mechanisms relevant to the societies of 21st-century Europe?

We investigated how a new notion of a musical past came about, and how it was applied by communities in:

Meanings of the musical past

If the compilers of the ‘magnus liber organi’ (c. 1250) proudly collected their sonic past in lavish books as a record of achievement, followers of the Devotio moderna, Hussites and Lutheran communities often favoured ‘archaic’ musical styles because they symbolised a venerable tradition. Alternatively, returning to the simpler sounds of the uncorrupted past, to them as to many today, held promise of a better future.

University communities in Central Europe in turn imported sophisticated music of a century or two ago from France and Italy; like ‘classical’ music today, cultivating the sounds of the past symbolised international outlook, education, power, and social prestige.

5 research teams in the United Kingdom, Poland, The Netherlands, Germany/Switzerland, and the Czech Republic implemented this project through:

Our Associate Partners ranged from internationally established early-music ensembles to a contemporary improvisation group to composition students. They contributed as ‘experimental musicologists’ and contemporary artists and helped disseminate the sounding results of our work to the European public through a series of concerts, workshops, sound and video recordings.

This video taken at our project conference in Utrecht (28-29 May 2018) demonstrates how Associate Partners and scholars collaborated in the SoundMe project: