Sean Curran at the SoundMe seminar in Warsaw 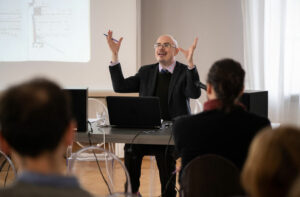 Sean Curran at the SoundMe seminar in Warsaw.

On 9 April 2019 Sean Curran (University of Cambridge) gave a public lecture at the SoundMe seminar at the Institute of Art of the Polish Academy of Sciences (Warsaw). The paper, entitled “Music writing and music history in a thirteenth-century song”, offered a close reading of a mid-thirteenth motet, Par une matinee / Mellis stilla / Alleluia. Through this case study, Curran tackled broader issues regarding the status of music writing, the social and institutional background of thirteenth-century polyphony, and the relation between ‘high’ and ‘low’ musical practices. An abstract of the paper can be found below.

Music writing and music history in a thirteenth-century song

This talk will reflect on representations of vernacular singing that are articulated from within a thirteenth-century motet — a musical genre of undisputed significance, but of uncertain social and geographical location in the later middle ages.

Those representations fit cosily with the common historiographical assumption that so distinguished a genre as the polytextual motet — if not all forms of singing we would recognise as polyphonic — was uniquely the
domain of those university-trained clerics whose music was made in writing, circulated on parchment, and performed from the book.

There are easy ways to criticise that historiography; more complicated is to explain why it fits closely with the articulated claims of motets such as the one we will discuss, which traffic on the idea that unwritten singing is silly singing.

I will suggest that ideas about the power of writing to determine the places of musical performance, and to distinguish skilled from lowly musical practitioners, were thirteenth-century ideas, and not only a fallout from musicology’s modernist concerns (as some would claim). The historiographical challenge is to realise that those ideas were also incorrect in their own time, in ways that the people who articulated them in compositions
may not — or may — have known.