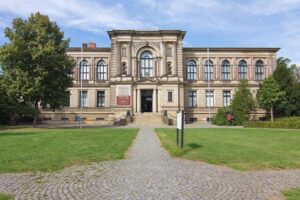 Christine Roth is spending six weeks at the Herzog August Library in Wolfenbüttel, in the first instalment of a three-month extension of her earlier research fellowship awarded her by the world-famous cultural repository in Wolfenbüttel. At the moment she continues research on Lutheran music collections and investigates the notion of the past in the 16th and early 17th century by studying historiographical treatises of the time. She is also working on several chapters of her PhD thesis.