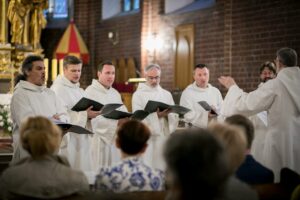 Concert of Schola Gregoriana Pragensis in Grudziądz,16 May 2018.

Schola Gregoriana Pragensis – Associate Partner of the SoundMe project – prepared a concert programme entitled ‘European encounters – three centuries of music’. Its contents relate to the research by all the five teams of the project. It includes compositions illustrating the interpenetration of the music repertory between different regions and faiths, at the same time showing the use of music of the past in the cultures of the 14th, 15th and 16th centuries. For some of these compositions, discovered and edited by project team members, this was the first time they were presented in public in several hundred years (see programme [PDF, opens in new tab]).

The programme had its premiere in Warsaw on 15 May 2018, during a concert organised in collaboration with the festival of the Polish Composers’ Union ‘Warsaw Music Encounters’. It was then repeated in Grudziądz, on 16 May 2018, where Schola Gregoriana Pragensis inaugurated the Petrus Wilhelmi Festival of Early Music. Commentary to both concerts was provided from the stage by Paweł Gancarczyk, PI of the Warsaw SoundMe team. Paweł explained to the audiences the idea behind the SoundMe project, and familiarised them with the compositions being performed.

The concerts were organised in collaboration by the Warsaw and Prague teams. Team members actively involved in the preparation of the concerts were Paweł Gancarczyk, Lenka Hlávková and David Eben, member of the Prague team and artistic director of Schola Gregoriana Pragensis. The concerts were noted in the press, radio and television, including one of the most important news programmes in Poland, the ‘Teleexpress’. They attracted a diverse audience of 270 persons in total, who received the performances with great enthusiasm. In Warsaw, Schola Gregoriana Pragensis gave two encores.

In order to document and disseminate the project, the Warsaw concert was recorded on video. Below we present the first contemporary performance of the song ‘Ihesum corde colite – Ons is gheboren’, which represents the ‘devotio moderna’ movement from the Netherlands in our concert. The materials for the performance were prepared by Ulrike Hascher-Burger from the Utrecht team.