Lecture by Gancarczyk in Basel 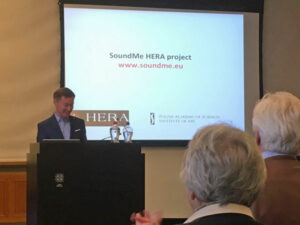 On 10 April 2018 Paweł Gancarczyk gave a lecture on ‘Petrus Wilhelmi de Grudencz (b. 1392) and the concept of Central Europe in musicological research’ at the University of Basel. In his presentation, he discussed the paradigm of ‘Western European’ historiography which regards Poland, Czech Republic, Slovakia and Hungary as ‘Eastern Europe’.

Using the example of Petrus Wilhelmi de Grudencz, Gancarczyk showed that there is no basis for separating the musical culture of these countries from the musical culture of the neighbouring German-speaking regions. According to Gancarczyk, separating Bohemia or Silesia from Austria or Saxony is the result of the political situation in which Poland, Czechoslovakia and Hungary found themselves during the period 1945-1989, and should not be applied to the fifteenth and sixteenth centuries.

He described as equally anachronistic the attempts to view aspects of the musical culture of that period from a nationalist perspective: Petrus Wilhelmi was not a ‘Polish’ composer (as he was classified at one time), but a composer who most appropriately should be described as ‘Central European’.

Referring to a number of compositions by Petrus Wilhelmi, Gancarczyk outlined their longue durée: works composed in the second quarter of the fifteenth century continued to be copied and modified as late as early seventeenth century. They were performed in different communities and fulfilled different roles, and this in turn influenced the transformations undergone by their musical structure. Finally, Gancarczyk talked about the significance of Petrus Wilhelmi for contemporary culture.