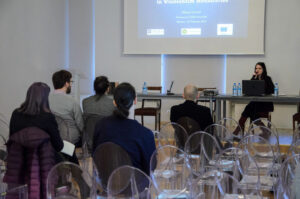 On the 27th of February 2018 Jan Ciglbauer (Prague team) and Manon Louviot (Utrecht team) presented the outcomes of their research at the 6th SoundMe seminar in Warsaw. The seminar, convened by professor Paweł Gancarczyk (Warsaw team), was attended by researchers and students from the Polish Academy of Sciences and the University of Warsaw, as well as by guest scholars from the Fulbright Scholar Program.

In his paper, Ciglbauer discussed Latin songs in Pre-Hussite Bohemia. Although such repertoire is usually identified solely with mensural compositions with a clear strophic structure, Ciglbauer was able to show that during the 14th-century the tradition was much more complex. He focussed on a specific genre that is present in Bohemian sources, namely mono-stanzaic songs with a melodic syntax close to plainchant. Interestingly, such repertoire disappears from Bohemian sources at the beginning of the 15th century, but survives instead in neighbouring regions such as Silesia, Moravia, Austria, Bavaria and Saxonia. In the discussion that followed, Ciglbauer had the chance to address the very idea of ‘genre’ with regard to the cantio repertory, discussing the lack of nuance of modern definitions, and showing how Medieval scribes had a ‘genre awareness’ which we ought to reconstruct if we want to truly understand this repertoire.

Manon Louviot’s paper discussed the ways in which the ideas of the devotio moderna were concretely applied in Windesheim monasteries by shaping space and controlling bodies. Analysis of the official regulations proved that the space was shaped and constructed in male and female monasteries in a similar way. Despite the very strict enclosure in female monasteries which imposed a greater control on women’s space and movements, the actual use of the space appears to have been very similar to that of male monasteries. It is also through the control of movement that the Windesheim Chapter shaped monastic spaces and created various degrees of sanctity, an approach exemplified by the reports of the reformer Johannes Busch. Louviot concluded by pointing to the function of these regulations in enhancing the arctior vita and the inner devotion, so important for Windesheim. This led to interesting exchanges between the participants of the seminar on the (blurred) borders between sacred and liturgical space(s), and opened the discussion onto the understanding of space in medieval and current liturgical practices, especially regarding the interactions of people and instrumental music (such as organ) during church ceremonies.