Performance workshop with Katarina Livljanic and Anonymous III in Cambridge 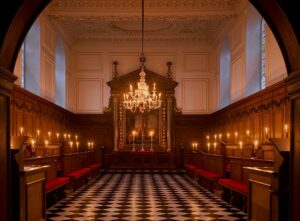 On Tuesday 20th February the Cambridge team welcomed Katarina Livljanic (Université Paris-Sorbonne and director of “Dialogos”) to Emmanuel College to work with Adam Mathias, Anonymous III (AP), and a number of choral scholars from the university. Over the course of the day, singers worked on a range of pieces, from chant through to 13th century Parisian polyphony, hymns to motets. In particular Katarina spent time preparing material with singers for an upcoming concert – medieval music in honour of the Virgin Mary – that took place on 9th March at Selwyn College, Cambridge.

The day started with a focus on monophonic repertoire including the Marian hymn Salve regina and the famous conductus Beata viscera attributed to Perotin preserved in MS F Pluteus 29.1 in the Biblioteca Laurenziana. Katarina dealt with questions of interpretation alongside vocal technique throughout the day and singers quickly responded to her comments and ideas. Alongside this, Adam Mathias (Cambridge team) also introduced and discussed each piece, facilitating dialogue between performers and scholars throughout the day.

The second half of the session was spent primarily on polyphonic repertories, which included a clausula and motet upon the chant Alleluia Hodie Maria, and two motets from a manuscript in the Wren Library at Trinity College (MS Trinity O.2.1) that Adam has worked on and transcribed. Here Katarina emphasised the important role of text in the shaping of melodic lines and singers quickly sought to play with phrase shapes and melodic stress, finding responses that reflected particular nuances of text.