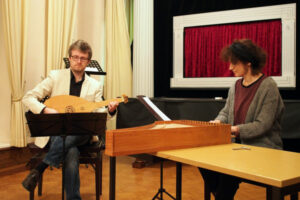 On the 25th and 26th of January 2018, the SoundMe teams convened in Heidelberg for a collaborative meeting with members of the project Die frühe Messvertonung zwischen liturgischer Funktion und Kunstanspruch, based at the Departments of Musicology in Mainz and Weimar-Jena. The meeting was organised as a series of eight papers, in which the speakers gave insights into their own research, addressing core issues that underlie both projects. Discussions were enriched by the attendance of Corina Marti and Michal Gondko, the artistic directors of the early music ensemble “La Morra” (Basel).

The first session was opened by Klaus Pietschmann, principal investigator of the Messvertonung project. Pietschmann focussed on the Roman manuscript I-Rvat C.S. 26 that includes a composite mass by Costanzo Festa and Heinrich Isaac. Pietschmann highlighted the self-referential character of this mass, offering hypotheses about its context of composition, and discussing the means by which Festa interacted with older repertoire.

The second paper was delivered by the SoundMe post-doctoral researcher Jan Ciglbauer (Prague team). Ciglbauer discussed Latin sacred songs in 14th-century Bohemia, looking at the repertoire from the perspective of its liturgical and/or devotional function. Through a detailed philological analysis, Ciglbauer was able to show how the repertoire moved between the poles of liturgy and ‘pious entertainment’, thus questioning attempts to over-define the function of these songs.

Laura Hafner, a doctoral student of the Messvertonung-project, presented her research on two manuscripts from Prague that are now housed at the Diocesan Archive of Köln. Relying on archival and codicological findings, Hafner reconstructed the context of creation of such collections, and how the two sources found their way to Köln, discussing issues of musical patronage in Rudolphine Prague.

The Utrecht-based SoundMe doctoral student Manon Louviot combined source-based historical research with a theoretical approach, and she addressed the interaction between space and liturgy in Windesheim monasteries, drawing on the constitutions issued around 1430. Louviot discussed the symbolic organisation of space, and the features that defined its sanctity. The core of her research is constituted by processions, ritual actions that are by determination linked with space, which allowed her to address the interaction between space, liturgy, sound, and silence.

Bartłomiej Gembicki’s contribution dealt with a methodological problem, namely the use of the term ‘cori spezzati’ for describing 16th and 17th polychoral music. Gembicki showed the pitfalls of ‘historical terms’, arguing that terminological ‘historicity’ is not a guarantee of semantic clarity. He also highlighted how specific terms contributes to the creation of musicological mythologies.

Antonio Chemotti’s paper moved back to the interaction between music and liturgy in Early Modern Europe. By focussing on a series of hymns de tempore published by the Lutheran pastor Valentin Triller, Chemotti discussed the interaction between pre-Reformation and post-Reformation liturgical traditions, highlighting the load-bearing role of the ‘liturgical year’ for the conservation of ‘traditional’ sacred tunes.

Christine Roth’s paper closed the session by linking the liturgical focus of the Messvertonung-project with the SoundMe emphasis on ‘Uses of the Past’ in her discussion of traditional elements in16th century Protestant liturgy.

On Thursday evening, words gave way to music – in the Säulensaal of the Heidelberg Institute of Musicology, Corina Marti (clavisimbalum) and Michał Gondko (Medieval lute) offered a concert with music by Nicholas of Radom, Johannes Ciconia etc., provoking discussions concerning the role of ‘Early Music’ in contemporary society, and notions of ‘historical authenticity’.