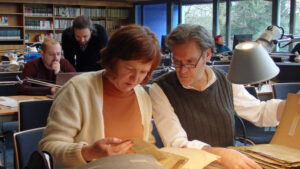 HERA researchers at the City Library in Trier: Lenka Hlávková and Burkard Wehner (Berlin, ‘Vox nostra’), with Antonio Chemotti and Jan Ciglbauer behind them.

On 23-24 January members of the Prague and Warsaw teams conducted research at the Stadtbibliothek in Trier. They were interested in little known manuscripts containing Central European repertory from the fifteenth century. Their attention focused in particular on manuscript 322/1994, which is the principal source of polytextual motets and Latin songs. The investigation concentrated on establishing the provenance and the date of creation of this manuscript.

The participants were Jan Ciglbauer (Prague), Antonio Chemotti (Warsaw), Paweł Gancarczyk (Warsaw) and Lenka Hlávková (Prague). The short visit to Trier resulted in the collection of substantial amount of data important for research into the uses of the past in fifteenth-century music. The visit was organised thanks to collaboration with Burkard Wehner (Berlin), leader of the early music ensemble ‘Vox nostra’.