From July 4 through July 8, 2017, the entire SoundMe team attended the 45th Medieval and Renaissance Music Conference in Prague. Two sessions were convened in order to present and discuss the first results of our research project.

On the first day of the conference, in the evocative surroundings of the Chapter Hall in the Convent of St Agnes of Bohemia, the team delivered four papers devoted to the ‘long durée’ of the polytextual motet in Central Europe. The session was the result of the collaboration between members of the Prague team (Lenka Hlávková and Jan Ciglbauer) and the Warsaw team (Paweł Gancarczyk and Antonio Chemotti), and it was chaired by a leading authority in the field of Central European musical sources, Ian Rumbold.

The papers highlighted various aspects of this tradition – not least its striking length – and drew upon a range of Catholic, Utraquist and Lutheran sources from the late 14th- to the early 17th century.

On the last day of the conference another session was organized by the Utrecht (Ulrike Hascher-Burger and Manon Louviot) and Heidelberg teams (Inga Mai Groote and Christine Roth). The different contributions addressed the role of music in periods of discontinuity characterized by religious reforms.

Ulrike Hascher-Burger, the respondent for the session, addressed the common threads between the papers and augmented these observations with parallels based on her research experience.

The session was enriched by a guest speaker, Fañch Thoraval. He discussed the various prohibitions of music among the Canons of San Salvatore, stressing the ever-changing social and political backgrounds of such attempts at reform.

Alongside the two themed sessions, all the doctoral students were actively involved in the conference, either as speakers or as chairs. Bartłomiej Gembicki delivered a paper on the contemporary perception of Early Music history, highlighting how record covers exploit marketing strategies that contribute to constructing ‘musical’ mythologies based on invented traditions.

Below you’ll find more information about the SoundMe sessions and papers at the 45th Medieval and Renaissance Music Conference.

The Polytextual Motet in Central Europe and Its Long Durée

The polytextual motet is a phenomenon which was cultivated in central Europe in a specific form until the end of 16th century. According to research conducted in 1960s and ’70s by Jaromír Černý, its history starts with “Engelberg Codex 314”, which was copied in a Swiss monastery in the early 1370s and ends with much later Bohemian sources of Utraquist origin.

The session discussed the earliest sources of the central European motet repertoire in the light of new findings on related manuscripts (J. Ciglbauer) and the motet tradition transmitted in the later Utraquist codices (L. Hlávková). The two case studies (A. Chemotti, P. Gancarczyk) presented:

Reforming Faith: Continuity and Disruption in the Uses of Music

→ Abstracts of the contributions in ‘Reforming Faith’ are in this PDF. 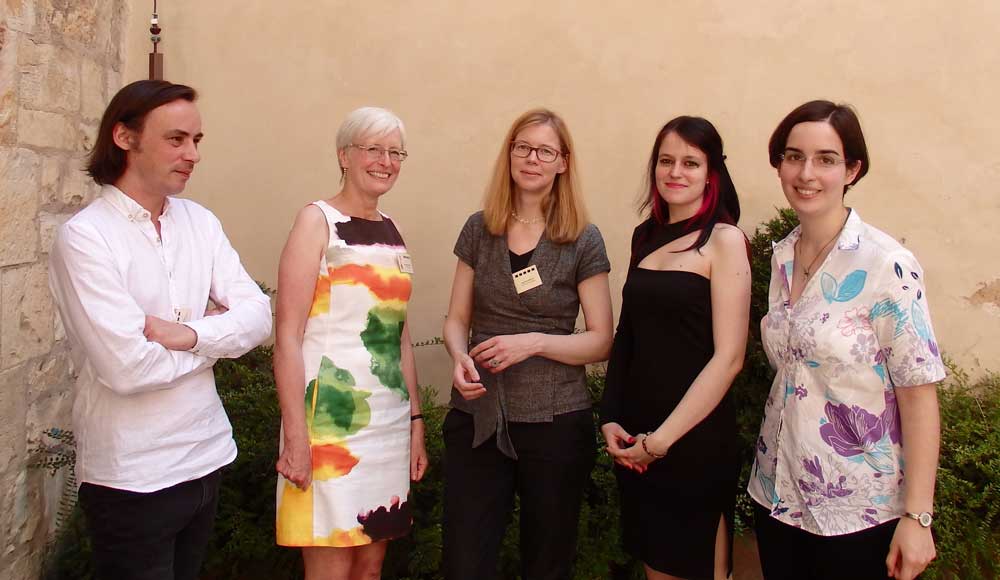 The speakers of the session ‘Reforming Faith: Continuity and Disruption in the Uses of Music’.

Early Music Recording as Mythography: Monteverdi and the “Other” Vespers

A substantial part of the modern recordings of the so-called early sacred music consists of the Vespers psalms and Magnificats – especially those composed by Claudio Monteverdi. Some of them attempt to reconstruct a specific performance from the specific day from the past, taking into account the possibly performed repertoire and the place of the service. In his paper Gembicki considers some of these recordings, focussing mainly on early 17th-century Italian Vespers collections. It is not his intention to criticize decisions made by musicians and their historical accuracy but rather to ask questions about the strategy adopted by the performers and producers as well as the possible impact on the present-day reception of this kind of repertoire.